Many Thanks To Simon Robinson For This Article On Cozy 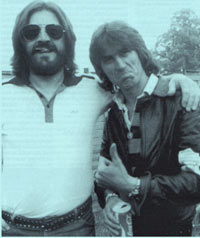 The sudden death of drummer Cozy Powell was a shock to us all in 1998. As an Ian Paice fan of some six years or so, Cozy's arrival on the Purple scene in 1976 was a jolt to the system. I'd heard some of the early Jeff Beck tracks which were Cozy's first main studio recordings - but wasn't really aware of who he was at the time. Likewise much of his jobbing session work for people like Julie Felix and Donovan was well away from my own musical interest, so all I really knew Cozy for were some of his RAK singles, and I just couldn't see how it was going to work. Blackmore of course knew exactly what he wanted and, as he honed his vision for Rainbow over the late summer of 1975 - aiming to forge a cross-over between Zepp and Purple - who better to help him fulfil that vision than Cozy Powell? Long-serving DPAS man Ernie Tull summed it up best when he described them to me back in the late seventies as "nailers".

Playing along to pre-recorded backing tracks also went against the grain in the early RBAS days, but Cozy was out to provide a spectacle for the audience. And it has to be said that the image of Cozy behind his huge kit, synched up to the 1812, with lights and fire-works in full flow, will never be forgotten. Nor will a night when it all went wrong, and Cozy actually man-aged to bring it all off despite the collapse of his backing tracks! But that aside, it was as a powerhouse anchor for Rainbow in their classic incarnation that Cozy should and will be best remembered by those of us lucky enough to have experienced them live in 1976 and 1977. For ourselves we actually only met Cozy briefly a couple of times, getting autographs outside the old Rainbow theatre prior to a Rainbow at the Rainbow gig, and then - of all places - outside the Birmingham Odeon while we were waiting for the members of Paice, Ashton and Lord to show up for the show in 1977. If I remember rightly, Cozy wasn't even supposed to be in the country at the time because of tax implications, but it didn't stop him having a natter and posing for a snap beside the sleek vehicle he'd driven up for the show in. "Stargazer" was never the same once he'd hung up his Rainbow badge and scarf.

The other trait one really had to admire about Cozy was his willingness to stand by his musical principals. He'd give something a go, and if he felt it wasn't working for whatever reason, he said so. Thus it was that he knocked the Mickie Most hit machine on the head to take a far less successful route with Hammer. When Blackmore began increasingly to sell himself and his fans short in Rainbow with chart bound AOR gems such as "All Night Long" and their ilk, Cozy walked. He'd nothing particularly against the material, but he knew it wasn't right for Rain-bow, or for him. Even more recently, when things began to go wrong in the Peter Green Band, Cozy knocked it on the head when he realised nothing he could do was going to put it right.

Of course, apart from Rainbow, Cozy returned to the Purple scene a little later on with Whitesnake. David Coverdale wasn't slow to realise Rainbow had made a serious error in losing the guy and after Whitesnake began to fall apart, Coverdale wasn't slow to poach Cozy for his own hand. Cozy had cut a couple of solo albums and been working with Michael Schenker in the aftermath of Rainbow but the chance to hook up with Coverdale produced one of the best Whitesnake albums of them all, "Slide It In" - with Cozy's contributions brought out to their best advantage on the incredible US remix of the album. While the Rainbow albums he cut will probably remain his best loved work, I have an enormous amount of time for his contributions to what I regard as the last of the true Whitesnake albums. He also did much of the groundwork for the "1987" album but walked out when his agreement over the deal was altered, leaving his replacement Aynsley Dunbar to try and re-record his drum parts. Outside these main areas, Cozy was always popping up on sessions involving Deep Purple and family members, and his work could be heard on solo albums by Bernie Marsden (unsurprising since they'd worked together in Hammer) and Graham Bonnet. Jon Lord's 1983 offering "Before I Forget", the off the wall "Phenomena" project from the Galley brothers (with Glenn also involved), and the various Forcefield albums cut for Japan. Cozy also took part in the Superdrumming shows made by Pete York for German TV and later issued on disc.

The bare facts of his death were made all the sadder by the impersonal newsagency manner in which 90% of the media tackled the story, churning out the press release in as sensational a way as they possibly could in order to get some mileage out of the "rock legend" angle. Most of the journalists - and one suspects the readers - probably hadn't a clue who he was, for he certainly never played up the superstar role.

The first time I met Cozy was when I interviewed him for Record Collector magazine, in London, December 1995. I had always been a huge fan (since a friend lent me Rainbow Rising in the early 80s), and had become a collector too. So I did my research. Cozy was tired, he had had a full day of interviews with MEtal Hammer, Kerrang!, all the usual, all the same old questions. I don't think he expected someone who was such a genuine knowledge or fan, and I have on tape, the answer to my first question, where he says "Fuck me, you would start with the most difficult thing I've ever done". He sat up and took notice and we got on well. I next met him back stage at a Peter Green concert, where I met Neil Murray too. During the gig, it was obvious Cozy was frustrated, Peter Green (for all his talent) not stretching Cozy. Halfway through the gig (It was at Tunbridge Wells), Cozy just let loose and this poor tiny drumkit started to fall apart, a tech coming on to hold it up for the remainder of the show.

I started work on a discography and press release for Cozy to use for his own promotion, put him in touch with a guy to run his website, and organised what was to be Cozy's last ever interview (on a Tony Carey website). I visited Cozy at his cottage near Cirencester (near Swindon); he picked me up from the station in his Saab (the one he would later die in), and he drove like he played - hard and fast. Spent the day at his cottage, and he played me rough mixes of two album he'd just played on - Brian May and Yngwie Malmsteen, he was raving about how good both were (and they both are excellent). Brian was a good friend, he wanted to play and tour with Brian more. Cozy told me that he was in a dilema as the two tours would clash, and he'd want to do both. Cozy was the genuine host, showing me round his gold disc collection, huge record collection, and so many tapes it was unreal. Demos, live recordings everything. It was then I first heard "Le Souk", which was due to be the fourth RAK single, and the album of Motown covers he did with Jeff Beck. Neither have been released, to date.The day included a large number of cups of tea. And talk of many projects, music, stuff we could do together where I could help promote him. I started up a fanzine for him too, which sadly only lasted 2 issues. The last time I heard from Cozy, was when he'd gotten back from the tour rehearsals in the USA with Malmsteen. Just before he flew out he'd had a motorcycle accident and this had affected his ability to play so he'd had to pull out. I still have the copy of the physio report he gave me. He had been in near tears at having to pull out, but then was back on the up saying that this was his chance to get fit (physio and in the gym, Cozy was very fit, had to be with the way he played), and then go out on the road. I got the impression Brian's was the tour of choice. His last words were he'd get me out on tour with him, and an interview with Brian May. The next day he was dead.